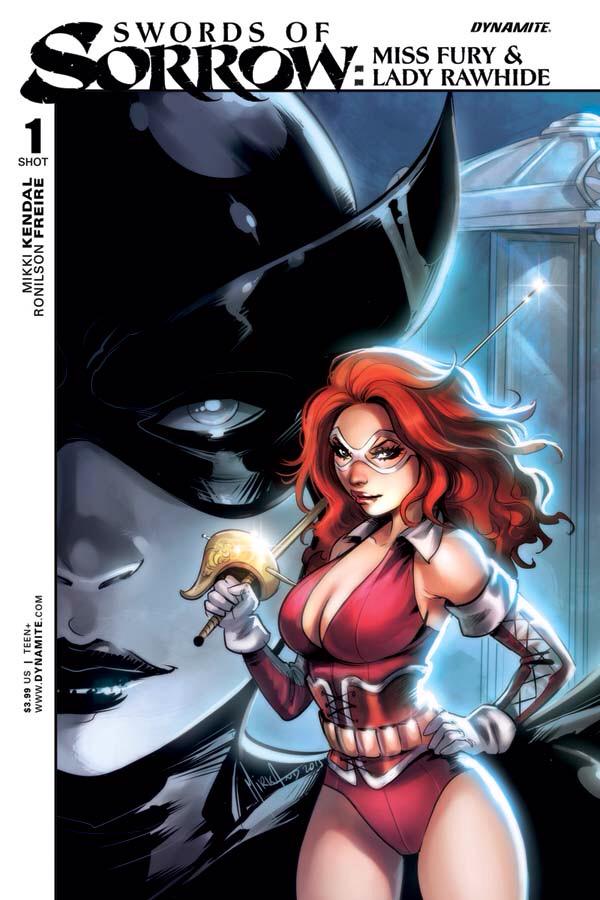 So this is my official cover for my one shot in the Swords of Sorrow universe. And it’s a little surreal to be here after years of thinking of writing professionally as a goal. You spend so long tilting at the windmills of getting published that when it happens you get knocked back a bit. And if you’re me you wait for pinch that wakes you up. But there’s no pinch. When I decided to give up my good government job to pursue writing full time I was hoping for a year or two to heal, and maybe to get a book out. Instead I’m working on multiple projects. You’ll be able to pre-order the comic book next month from your local comic shop or online at Dynamite.com or on Comixology. It comes out in September. And just like that I’m on to the next project, because that’s part of this life.

Like a lot of full time writers I don’t just do one thing (seriously, never expect a single project to be what pays the bills), I do a lot of things. I write content for e-learning programs, I do the thinkpiece hustle (most recently in the Washington Post), write book reviews, I’ll be editing Hidden Youth, I do a fair bit of public speaking (next up is BlogHer 15), and generally I hustle all month. Every month. Clearly this is my vocation, but I’m not above the allure of a steady paycheck. In fact for years I was writing on the side while working full time (and in college at one point, though I don’t recommend that schedule because OMFG exhaustion), because I’m married with kids and I have responsibilities beyond pursuing my dreams. That doesn’t mean I stopped pursuing them, I’m just allergic to being a starving artist.

It doesn’t hurt that I have a particular skill set and background that makes it easy for me to get work in your average office regardless of industry. People talk a lot of shit about administrative assistants, but if you’re a writer it is in many ways the dream day job. You push papers around mostly, do some tech support (Printer needs a new motherboard? You can install that. Seriously I’ve done it.), and often have whole days with nothing major to do. If you’re efficient, you can make your boss think you’re working hard and hardly be working. I used to come in early, do all of my major tasks for the day by 10 or 11, and have the rest of the day to write or edit or pitch. At least two of my earlier bosses knew the deal and they just didn’t care because I always had their stuff done first. The downside is that office work is often boring, and coworkers can make things 100% more stressful than they need to be, especially if you’re someone who writes best when the rest of your life is quiet.

I work much harder now than I ever did in any office gig. And of course what I do now is easier in some ways than retail or food service (actually everything is easier than food service, I like cooking but I hate serving food for some reason), but the income flow is less stable and I have to push myself. Some months I make enough to pay all of our bills, most months I make enough to pay about half of them (this is where the aforementioned husband comes in), and any extra expense can throw a wrench in the works like you would not believe. I have that dental fundraiser going, not because we can’t cover some of it, but because that much extra cash in one year is more than I wrangle up while freelancing. Actually I’m not sure I’d be able to pull it off with a regular day job either. At least not with what I was making as an admin. And when I was working for VA, the stress levels meant I wasn’t writing, and the work was far too much for the pay.

So I cobble together what I need and keep my stress levels down so I can create. And it is risky financially. I’m so aware of that fact. But mostly we get by okay, and I can see the results of taking that risk as being worth it. I can always go back to having a day job. In fact I keep an eye out for day jobs that I think might be worth giving up my current flexibility for (so far I’ve only found one, and while I applied I didn’t get it) because I do like having that option. But when I stepped out on this proverbial ledge, my day job was giving me ocular migraines 3 or 4 times a week, and writing was the only way I could see to support myself while my body healed. I’m stronger now, the migraines have mostly stopped, and my name is on a comic book cover. Is freelancing easy? Nope. But I think it is totally worth taking the risk if you have some safety nets in place (a low cost of living helps a lot, I couldn’t do this in NYC or San Francisco I suspect), and a back up plan. Also, don’t be afraid to step out of your comfort zone. Opportunities will come your way that might not look like anything you planned, and they can still be the best thing that ever happened to you. I made Gail Simone cupcakes, talked about writing, and somehow, some unbelievable way, I found myself here. With a comic book with my name on it.